For some, the term affordable housing might have connotations of bare necessity dwellings, perhaps similar to the threadbare commission homes  of the 50s and 60s.

This is not necessarily the case, and definitely not so for the developments of Canberra’s ‘CHC Affordable Housing’.

CHC (Creating Homes and Communities) Affordable Housing is a not-for-profit development company that delivers affordable properties for both sale and rent, for Canberrans on low to moderate incomes.

Partnering with some of Canberra’s leading builders and architects, the organisation is focused on delivering well-located, functional and flexible housing options that are redefining the concept of being ‘affordable’.

In constructing its Eclipse Apartments project in Bruce, ACT, architects and builders were briefed to create a complex that would deliver both economic outcomes, and adhere to the environmentally-sustainable principals desired by clients. Dincel Wall was used extensively throughout the project to assist achieving these goals, according to Project Manager, Michael Owen.

“The project consisted of 200 apartments in a configuration of six buildings,” Mr Owen said.

“My sole purpose as a Project Manager is to aim at delivering projects on time and on budget. After considering other alternatives, the Dincel Construction System was selected for the vertical building elements consisting of facades, party, lift-stair shafts, shear walls, basement walls and columns in both basement and superstructure, being integrated with the 150mm thick slabs above the post tensioned podium level.”

With the wide use of 110mm and 200mm Dincel party walls and the system’s loadbearing qualities and acoustic certification, the developer was able to specify 150mm thick floor slabs with only top and bottom mesh with stock length bars over the walls reducing costs considerably. Mr Owen said the time and cost savings achieved using Dincel Wall were considerable.

“I am confident that after this first major project with Dincel, I will further improve the cost and time savings for any future project adopting the Dincel Construction System principals.

“Dincel should be treated as a building system rather than comparing it with other wall systems. I highly recommend developers who wish to save significant time and money to view the Dincel document titled ‘Costing Analysis’ available on the Dincel website.

“The product is well supported by professional engineers and I have found the Dincel team to be highly experienced and very accommodating in working with the construction team.” 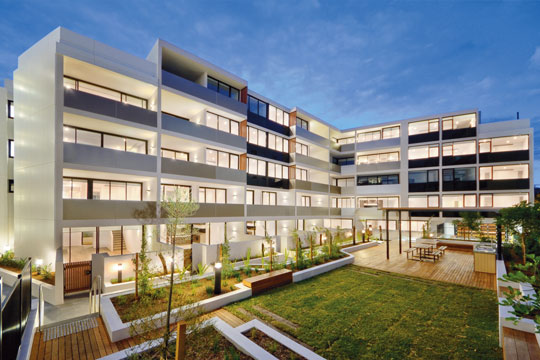 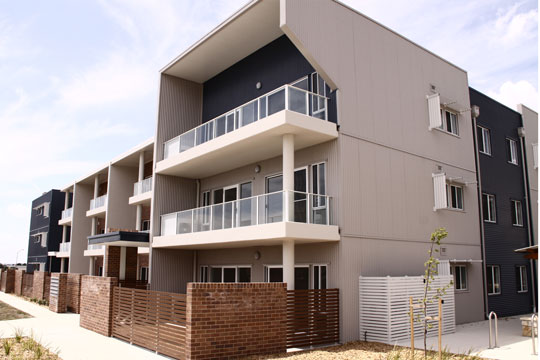 Tasked with creating 25 studio apartments, a garden courtyard and a retail space on a 10 metre by 45 metre site on Sydney’s busy Parramatta Road in Annandale, architects Environa Studio and builders PRA Constructions found Dincel Structural Walling really helped them out in a tight spot