What is Dincel Structural Walling?

The polymer formwork stays in place after the concrete is poured (formwork is not stripped afterwards), thereby providing the wall with a waterproof and durable skin. This skin protects the concrete and steel reinforcement which increases the lifespan of the walls compared to conventional concrete and masonry structures.

How are Dincel walls constructed?

Dincel hollow formwork panels are ‘snapped’ (clicked) together to build and form the wall. This patented snapping action ensures a safer, faster installation. While connecting panels, steel reinforcement can be added inside the wall as required. Once this is complete concrete is simply poured within the Dincel formwork.

The system comprises of accessories such as corners, caps, guides and joiners in order to streamline the installation process.

What are the standard dimensions of Dincel modules?

Wall dimensions do not need to exactly match Dincel standard panel widths, our profiles can simply be cut on-site to suit requirements.

What are the time and cost benefits of using Dincel walls?

Yes - Dincel is manufactured in Sydney, Australia. Supply is readily available for pickup or delivery Australia wide. For ordering:

Are any special tools required to install Dincel?

No - Standard hand held tools are all that is required for most projects.

How do I brace the Dincel forms?

The base of the forms is restrained by a Dincel polymer guide (P-G), timber guides or angles, which also establishes the location of the walls. The top of the forms can be braced with either steel (push-pull prop) or timber bracing. Most of the bracing can be eliminated if there is a formworking deck above which the Dincel panels can be simply screwed into.

How is steel reinforcement placed into the form?

The unique design of Dincel formwork, as certified by the University of New South Wales, enables steel reinforcement to be eliminated for a wide variety of applications. However, if steel reinforcement is required, please see below installation methods:

Do I have to use a special concrete mix?

No - Refer to the Concrete Mix Specification within the Dincel Construction Manual.

Should a concrete pump be used?

Yes - The system is designed to work best with a concrete pump, and the use of boom pumps is especially recommended. Concrete can also be placed with crane buckets, elevators or other typical placement methods.

Do I have to pour more slowly than with conventional systems?

No - The Dincel forms allow concrete placement at a nominal rate of approximately 1.5 vertical metres per hour (refer to concrete placement specification within the Dincel Construction Manual for exact requirements). The 275mm profile with its incredible strength allows for a single pour up to 4.5m!

Can I vibrate the forms?

Do I need to use superplasticisers in the concrete mix design?

This depends on the circumstances. If a 50mm pump discharge pipe is used, superplasticisers are not recommended due to their limited working times. However, water reducers which don’t affect concrete working setting time may be used.

Do Dincel forms ever blow out?

No - Provided the ends/corners of the walls are properly braced and the Dincel recommended method of installation is followed, it is almost impossible to have blow outs. Bulging of the forms can occur if a wet concrete mix is dropped into the forms from excessive heights or too fast. It is therefore recommended that the concrete pump discharge is directed to one of the internal webs of the Dincel profile to slow down the free fall of aggregate, avoid segregation and hydrostatic impact pressure. Refer to the Dincel Construction Manual for guidance.

Do I get uplift at the base of Dincel wall forms during concrete pouring? And do I need to fix the bases of the wall forms to the wall bottom tracks/angles?

No - This uplift phenomenon occurs with porous formwork surfaces such as fibre cement, masonry blocks or plywood sheets. Since cement slurry does not bond (no water absorption) to the polymer surface of Dincel forms, the formwork uplift which is normally experienced with common formworking systems does not occur with Dincel.

In addition, the round, horizontally aligned web holes of Dincel modules prevent the free fall of coarse aggregate, hence minimise concrete segregation. The same phenomenon, commonly called elephant-trunk action, pushes the forms down against the potential uplift caused by the wet concrete mix.

How can I ensure there are no air voids within Dincel walls?

To ensure there are no air voids, use:

Air voids are a known problem for formwork consisting of porous materials such as fibre cement, masonry blocks or plywood. Due to the water absorption of these materials, concrete adheres to the form face and this builds up on the surface causing air pockets. This does not occur with Dincel is due to the impervious, frictionless polymer face which enhances concrete flow within.

How often do I need to provide joints in Dincel walls?

The system incorporates in-built crack inducers which act as shrinkage movement joints for the Dincel wall. Therefore, joints for standard crack control purposes are not required. However, building construction joints (joints in suspended slabs) may need to be carried through and incorporated into the Dincel wall as well.

How soon can I install Dincel forms after foundation or slab concreting?

Typically the day after pouring the in-situ foundations or slabs. This is confirmed by the project’s structural engineer and is dependent on concrete setting times and the building design.

Is there a cost and time benefit if Dincel is installed by the floor formworkers?

Yes - This is a great advantage in terms of construction program, liability, safety, time and cost:

How are Dincel walls finished?

Dincel walls can be finished in a wide variety of ways. Typically, the following finishes are applied:

Does external render peel-off (delaminate) from the Dincel surface?

No - Dincel panel joints control and minimise the contraction and expansion movements of the wall surface. Any differential movement between the Dincel skin and applied render finish is significantly reduced in comparison to conventional walls. The etching primer prepares the Dincel surface for chemical bonding. The polymer render base coat, being flexible enough, also absorbs any possible movement differential at the matching surfaces. In fact, this combination becomes much more reliable than the conventional cement render applied to masonry, concrete or fibre-cement surfaces. To view the companies who provide long term warranties that their render will not delaminate from the Dincel surface please see the Render Product Options

Will movement or temperature variations cause cracking of painted/rendered Dincel surfaces?

Conventional concrete walls crack due to the brittle nature of the material and the process typically starts while the concrete is still plastic. Unlike conventional concrete, Dincel provides an impermeable permanent skin which enables an ideal curing environment and subsequently allows the concrete to achieve additional strength and crack resistance performance. In addition to this, Dincel also provides internal crack inducers at approximately 125mm centres which cracks the concrete at controlled locations in order to act as expansion joints.

The presence of Dincel crack inducers distribute the contraction movements along the length of the wall and hence minimises the surface movement for the paint/render application. The paint/render used with Dincel should possess adequate elasticity to handle the maximum movement at each Dincel panel which is typically 0.8mm [(70-12) x 10-6 x 40°C x 333mm = 0.8mm]. Each Dincel panel joint has been designed to accommodate 1.5mm of movement. Therefore, the elasticity of the paint/render needs to be 0.8mm/1.5mm = 52% at 40°C variation. Special consideration needs to be taken for dark coloured renders where the wall surface temperature may increase significantly.

It is essential to check with the selected render manufacturer:

Further to this, a high amount of moisture inside the Dincel wall may lead to vapour trying to escape the system and cause cracks at Dincel vertical panel joints. In order to prevent this:

What distinguishes the polymer formulation that Dincel uses from common PVC?

During Construction
Dincel provides custom profile lengths between 1800mm and 7950mm which significantly minimises the need for cutting and creating construction site wastage. Any Dincel product that cannot be used on site can be sent to third parties for recycling (the same standard practice as the PVC pipe industry). 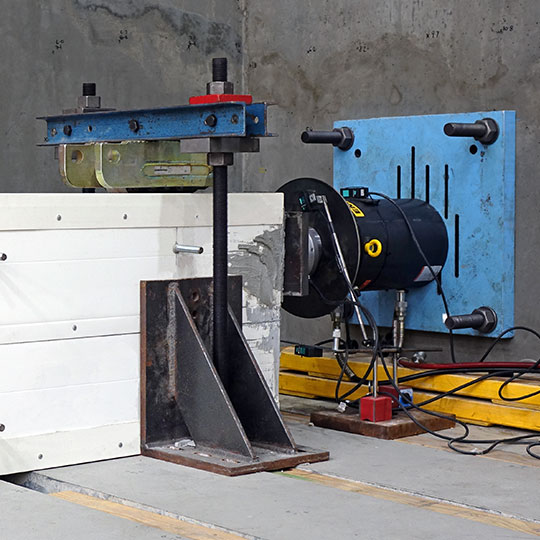 The fail-safe method for eliminating air voids in permanent formwork

The fail-safe method for eliminating air voids in permanent formwork 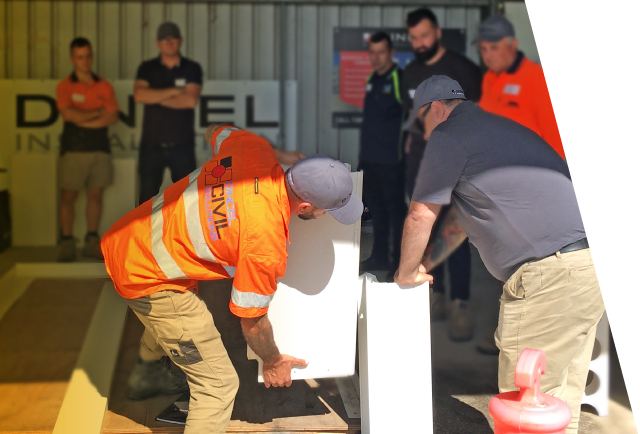 Please complete the form below and select from the available dates to secure your spot today.

Thank you for booking training session at Dincel Academy.
You will shortly receive the confirmation email.

For more information on the Void Free Warranty, please complete the form below and one of our team members will be in touch within 24 hours (Monday to Friday).

Thank you for your interest in the Dincel Void Free Warranty
a Dincel representative will be in touch within 24 hours (Monday to Friday).

Thank you for submitting your registration request, a Dincel representative will be in touch within 24 hours (Monday to Friday).