With 40 years’ experience in construction, Greg Woon knows a thing or two about building.

Now, having used Dincel Structural Walling to construct a fire shelter on his family’s rural property, he also knows no other construction system equals the many benefits Dincel offers.

Located in the picturesque Yarramalong Valley, 100km north of Sydney in the NSW Central Coast Hinterland, Greg Woon’s rural property, has been his family’s very own slice of heaven since moving there in 2000.

However with Greg, his son and his daughter all volunteer fire fighters with the Rural Fire Service, the Woon’s are keenly aware that even heaven can turn hellish in Australia’s cruel bushfire seasons.

Which is why Greg knew it was wise to construct a fire shelter near the family home; and considering various construction options, he knew that Dincel Structural Walling was the wise choice to construct it.

“For a start we needed a four-hour fire rated underground structure and Dincel walling has been tested by the CSIRO and shown to provide four hours fire resistance, so it certainly met that safety requirement,” Greg said.

But fire resistance wasn’t the only benefit that made Dincel Structural Walling the sure-fire choice for the retired builder; with his property’s remote location and the fire shelter being built into the hillside, Dincel offered a host of other key benefits.

“Two big issues everyone faces in building out here are getting tradespeople and getting materials to site,” Greg explained. “Dincel resolved both those issues – and more.

“With the lightweight Dincel panels you don’t need special cranage, manual handling is easy, if you want to trim them on site it’s simple, and you don’t need particular tradespeople to put the steel in because it’s child’s play.

“They also have an excellent installation guide, so once you study that it’s very simple to get the panels up and all you need is to correctly brace the walls,” he said. “With the fire shelter, we actually poured the walls and the roof in one go, so we didn’t need to get a pump in at different stages; apart from doing the base slab and the starter bars out of that, the structure was all done in one straight pour.

“The traditional options would have been conventional concrete walls, floor and roof, which meant formwork and heavy work, or we could have done it with core filled blockwork and so on, but then you’ve got waterproofing problems and such.

“But with Dincel Structural Walling we had a completely positive construction method; in one go you’ve got your fire rating and waterproofing, it cuts out a whole lot of trades including brickies, it’s quicker, it’s simpler, and the surface you’re left with gives you unlimited possibilities for finishes in my view.”

Eventually building not only the fire shelter but also a pool house, retaining wall and pond with Dincel Structural Walling, Greg then utilised a number of different finishes on the panels with extremely pleasing results.

“With the teak walls it was just a matter of dynabolting battens onto the wall and putting the timber up,” Greg said. “And with the sandstone, slate and big sheets of weathering steel, we used one glue for them all, so it was very simple, and we’ve had zero failures of any of the surfaces we’ve adhered."

“From Dincel & Associates engineers drawing up the structural designs, through to support and advice on product use and finishes, Dincel were unbelievably helpful; it’s not just the product that makes a project much easier.”

Having worked on many major projects throughout his career in construction - including mining and energy projects in remote areas where the lightweight Dincel panels would have proved so beneficial in terms of transport and labour costs – Greg believes Dincel Structural Walling is a landmark advance in building technology.

“And with the cost of labour and such these days, it doesn’t matter if you’re building a fire shelter or a multi-storey building; people are looking at the dollars and Dincel is by far a cheaper and more efficient way to build.”

in one go you’ve got your fire rating and waterproofing, it cuts out a whole lot of trades including brickies, it’s quicker, it’s simpler.. 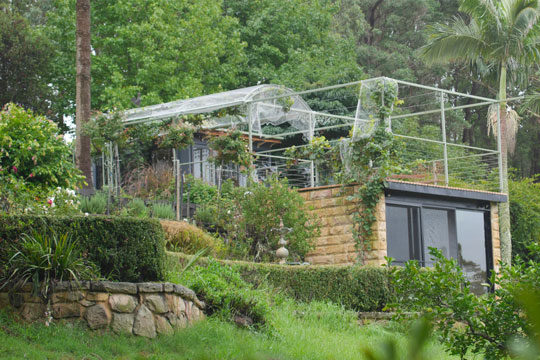 Located in the picturesque Yarramalong Valley, 100km north of Sydney in the NSW Central Coast Hinterland, Greg Woon’s rural property, has been his family’s very own slice of heaven since moving there in 2000.